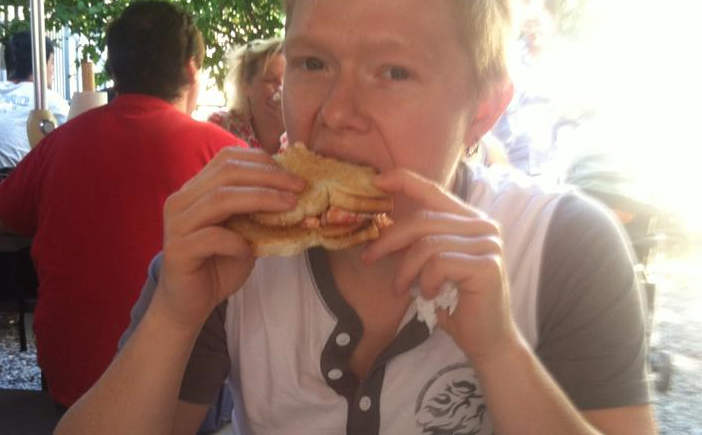 It seems lately that I can go from Happy Hannah to Hangry Hannah (hungry+angry=hangry) in a matter of moments. It is a Jekyll and Hyde type of transformation from my normal self, a person who is generally laid back and polite, to a ravenously, desperately hungry version of myself, reminiscent of a starving werewolf. This doesn’t come as much of a surprise given my workout schedule, but consider this fair warning: you better hope you are not the one who comes between me and my next meal.

Similar to most women, I’ve had a complicated relationship with food and my body since long before I started shaving my legs. It all began when someone in my second grade class decided I was the fat kid. Unwittingly, that person shaped the way I would view my body for the next 20+ years. When I was only seven years old, a stubby tomboy with long, red pigtails and grass-stained knees, my body went from being useful to being ornamental. This new expectation that my body be decorative was devastating to my self-esteem simply because I wasn’t the shape and size a bunch of little kids thought I should be. I remember going home the first day someone called me fat, looking at my body as I sat in the bathtub and feeling disgust at the little rolls on my stomach and the fat on my thighs. I still feel that revulsion today.

I spent most of my teenage and adult life at the same weight, give or take five pounds. It didn’t matter how active I was or was not—I simply was more or less toned. Until, that is, at 29, I all but stopped eating and lost nearly 30 pounds over the course of a couple months. At my slimmest, I weighed in at 112 pounds, which at my height, means that my BMI registered as “athlete” on the little online chart (because what, but those BMI charts should be telling us who is an athlete?). This felt like a major achievement to me. I was finally skinny enough to be an athlete! I had to buy new clothes because my old clothes hung on my body like a scarecrow’s. These new clothes fit the way I had always wanted my clothes to fit. I felt small and sexy, and I was comfortable in my body for the first time in my life.

However, soon I was fighting the urge to eat from the time I woke up until the moment I fell sleep, and this caused me to sink into depression. The idea that each day for the rest of my life I was going to have to battle with food in order to be thin was absolutely overwhelming. By the end of my skinny year and a half, I was attempting to eat a diet of less than 1300 calories a day while running about 50 miles/week. Food had become the enemy. I hated food for tasting so good, but all my mental energy was devoted to thoughts of my next meal (even if it was a celery stick) and counting calories and not eating what or when I wasn’t “supposed to”. I learned later that preoccupation with food like this is a symptom of starvation. Eating anything that tasted good was terrifying because I knew that one small piece of chocolate could mean that I lost all control and ate everything I could find. I was famished all the time. Even when I did allow myself to eat, there remained this deep, soul hunger that could not be satiated. At that point, I had not had my period in nearly 18 months (another sign that my body was starving), but I actually took pride in this—this served to me as proof, not that I needed to eat more, but that I was a “real” endurance runner. It never occurred to me that running marathons was evidence enough that I was an endurance runner. No one told me that this behavior was crazy—at least, not that I remember. Rather, I only got complements about how fit and thin I looked. No one knew how very tired I was though. I finally arrived at the thought, “is being skinny really worth the cost?”

Eventually, I concluded that no, being thin was not worth the loss of my happiness. I gave up on restrictive eating and began allowing myself to eat anything I wanted. If what I wanted was an entire 1lb bar of dark chocolate from Trader Joe’s, that’s exactly what I ate. Nothing was off limits—there were no longer “bad” foods. At first, I ate everything. I put away the scale, and I ate. Rather than trying to suppress cravings and ignore the feeling of hunger or drown it with glasses of water, I started trying to listen and respond by giving my body what it wanted. And gradually, over the past 9 months, I’ve come to a point where I don’t want to eat everything. I’ve found that most often, my body wants healthy things (although rice cakes and cucumbers don’t taste nearly as good when you’re not starving). Sometimes, however, my body wants three dark chocolate peanut butter cups. Or maybe six. And that’s totally fine. I’ve learned to trust my body, having faith that it will tell me when and what it needs to eat and when it’s had enough.

Yes, I’m back to my original weight—30 pounds heavier than the days of hunger. Even though I know I am so much happier when I’m allowing myself to eat, I still can become frustrated just by putting on an old pair of pants that no longer fits or by catching a glimpse of myself in the mirror. It is boxing, more than anything, that is helping me look at this image in the mirror in a new light—or perhaps, more accurately, an old one. Boxing has caused me to appreciate my body again like my seven-year-old self when my body had just one purpose: to carry me around outside so I could play capture the flag, run barefoot through the woods, swing from the monkey bars, and climb trees.

My therapist called my introduction to boxing (which came shortly after I decided to start eating again) an accidental intervention. This is because weight means something different in boxing than it does in the rest of the world—it determines the people you can fight, not how well you fight. It’s a number on a scale, not an indication of your worth. In boxing, there’s a term called your fighting weight. This is your natural body weight when you are in top shape and ready to fight. I love this because it acknowledges that all our bodies are different—the weight of one person in peak physical condition could be quite different from another person’s fighting weight, even if they are the same height. It also suggests that your body “wants” to be at a certain weight. Because of this mentality, there is a certain nonchalance surrounding one’s weight among boxing women. I was shocked the first time a woman at the gym dropped her weight in casual conversation and appeared to have no discomfort or embarrassment whatsoever about this number. I learned that your weight is not something to be ashamed of in the ring. In fact, weight, when used properly, can be to your advantage as a fighter (which is why people fight in weight classes). Besides, you may as well get comfortable with the number on the scale because, come fight night, everyone will know it.

With practice, and by surrounding myself with people who are comfortable with their bodies (or at least, more comfortable than most), I have started to respect my body for all the things it can do, rather than constantly berating it for not looking the way I wish it would. I try to say a tiny prayer of gratitude each day for the things my body is good at. “Thank you for healing in spite of the abuse I inflict on you on a daily basis.” “Thank you for building muscle and learning new things.” “Thank you for not dying when my trainer decides I need one more round.” I don’t have it all figured out. Not even close. There are still days I feel repulsed by my body. Although I no longer have a meltdown because my old pants don’t fit, those deep-rooted feelings of shame and guilt are not far beneath the surface. We’re getting there though. I’m learning to work with my body, instead of against it. I’m trying to give it what it needs so it can serve me better. Learning to listen to and love my body is slow work, but at least now Hangry Hannah only survives until I get my hands on a granola bar. And we can all be happy about that.

2 thoughts on “an accidental intervention: how boxing helps me eat”